I wrote my first AngularJS service today. It was nothing big, I was just trying to keep from repeating code on every screen. On the site, an alert shows up after a user adds or updates a record. Angular-ui-bootstrap was giving me most of the functionality I wanted, but it doesn't have a way for the alerts to close automatically after a certain amount of time. I had already figured out how to get around that, but I was repeating the code in every controller. So I went ahead and wrote a service for it. 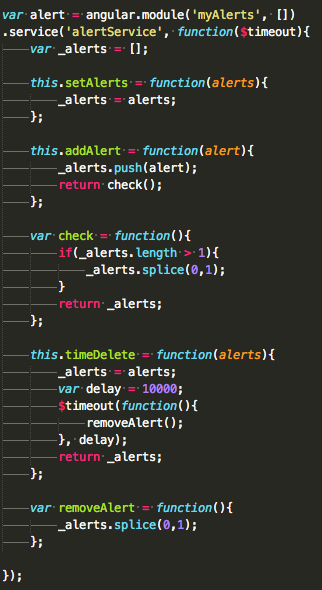 To learn how to do this, I referred to this blog post by Tyler McGinnis. It clearly and simply walks through the differences between factories, services, and providers in AngularJS. Before reading that, I didn't know what the difference was, so that was a good starting point.

I decided on using a service, mostly from a suggestion from a co-worker. It was pretty simple though to use, and made sense after reading Tyler's post. I put the service under its own angular.module so that several pages could easily reuse it.

The next part could have been done several ways. For this site, we only wanted one alert at a time to show. So when you add an alert to the _alerts list, it then checks to see if there was already an alert in the list. If so, it removes the first one, leaving the most recent alert in the list by itself. The service then returns the _alerts list to the controller so that it can be displayed properly by the page. 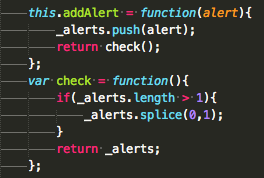 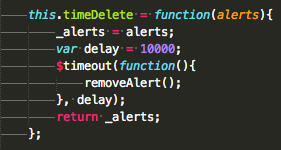 Overall, this was a pretty simple service, but it allowed me to put minimal repeating code on each page, whereas before this I had all the alerts code on each page (6 pages before I switched it). If you still have questions on the differences of factories, services, and providers, go ahead and read the blog post I referred to earlier. Hopefully seeing this in practice may help as well.